On the Trail of Light, Food for Supermassive Black Holes

A graduate of the Universidad de Antioquia published a study on Active Galactic Nuclei (AGN) that provides insight into the dynamics of supermassive black holes and the evolution of certain regions of the universe in which they "gobble up" all the energy and luminosity that surrounds them. 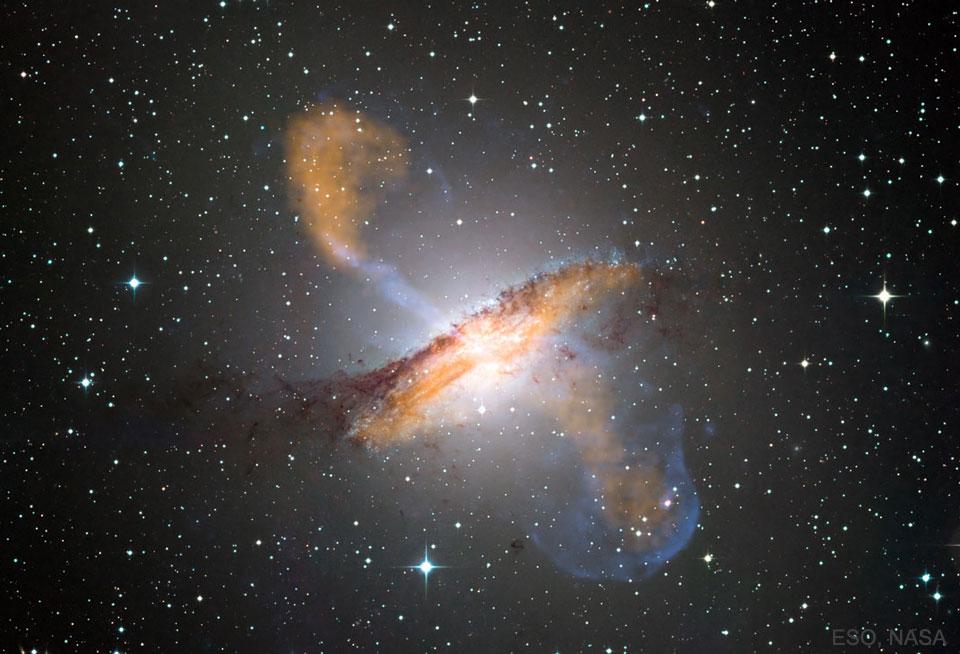 It is believed that all galaxies have a supermassive black hole —an astronomical object that measures more than billions of solar masses— but the feeding phenomenon occurs only in 10% of them. When this phenomenon takes place, a disk of matter is "swallowed" by black holes. It is a spectacle that generates some of the most beautiful images known of the universe in addition to a narrative about a galaxy that is in decline or close to the cessation of its activity.

What exactly is an AGN? "In several galaxies, there are disks around black holes that feed them. It is a region in which hot gas and stars that are close to the galactic nucleus are engulfed by the black holes. The energy produced in this phenomenon, which is converted into luminous energy, is known as AGN", explained Natalia Osorio Clavijo, an astronomer at Universidad de Antioquia. She is currently a doctoral researcher in astrophysics at the Institute of Radio Astronomy and Astrophysics, Autonomous University of Mexico (UNAM). She has spent the last five years studying this phenomenon.

In her research, Ghosts of Active Galactic Nuclei: A Systematic Search for Vanished Nuclei (Fantasmas de núcleos galácticos activos: una búsqueda sistemática de núcleos desvanecidos), published in December 2020 in Harvard University's The Astrophysical Journal, she discusses samples obtained from the observation of the feeding phenomenon. The initial formation of this phenomenon is still an enigma to science. However, it is known to be a key piece in the evolution and fate of some galaxies. Although it is possible to see other events with higher luminosity, such as gamma-ray bursts —a phenomenon of electromagnetic radiation produced by the explosion of a star or supernova— these are very brief compared to the lifetime of AGNs.

"The jets come out of the center of the AGN. They are derived from the light release that allowed the activity to occur long ago and which can be seen through the radio wavelength", said Osorio Clavijo. She added that these powerful events are good indicators to study the universe on a large scale.

"Depending on the wavelength from which they are observed, we have a zoo of AGNs. Some of them are called “blazars”, “quasars”, “radio galaxies” and “Seyfert galaxies” because enormous amounts of energy are produced in their nucleus. All of these are part of the compendium of species that allow us to study the universe on a large scale", said Osorio Clavijo. She added that, although all galaxies have massive black holes in their nuclei, not all of them have AGNs.

These luminous emissions cannot be seen with the naked eye because they are millions of light years away from the Earth. Therefore, telescopes with high resolution that capture different wavelengths are used. One of these is Hubble, which is located at the edge of the atmosphere, 593 km above sea level. Ground-based telescopes, such as the Atacama Large Millimeter Array (ALMA), located in Chile, or the Chandra X-ray Observatory, the most widely used to observe AGN in X-rays, are also used.

"When you examine large distances in the universe, you observe the past. It is a window to a previous epoch, in which the universe seemed to be much more active. This tells us that the universe could be dying", Natalia Osorio Clavijo.

However, not all black holes suck in the stellar material that surrounds them. "In the core of our galaxy, the Milky Way, there is Sagittarius A*, a black hole of approximately 7 million solar masses, a unit of measurement used in astronomy to compare objects or events of great magnitude in the universe. Nevertheless, the central disk of our galaxy does not feed it, that is, we are not going to be swallowed by it", said Juan Carlos Muñoz Cuartas, PhD in Astrophysics, researcher at the Institute of Physics of Universidad de Antioquia and advisor of the undergraduate student's dissertation.

These massive events are evaluated by the scientific community, as they are a testimony of how stars expand and consume each other. Thus, they make it possible to detect active and very remote galaxies. However, these objects are not fully understood.

The phenomena associated with AGNs have been studied since the previous century through the astronomical technique of spectroscopy. It is used to determine what elements are in a galaxy and what physical phenomena occur in them. It was precisely in 2020 that the Nobel Prize in Physics was awarded to Reinhard Genzel and Andrea Ghez for their work on the supermassive black hole, Sagittarius A*, which they studied for 30 years through the telescopes of the European Southern Observatory (ESO).

In some cases, the luminosity emitted by AGNs is so dominant with respect to the host galaxy that the light from the latter cannot be observed. Cygnus A and M 87 are some of the best known low-luminosity AGNs.