Genetics for Bereavement, the Right that Comes with Family

Universidad de Antioquia’s Genetic Identification Laboratory (IdentiGEN) provides specialized human identification and genetic filiation services. It is also dedicated to the recognition of bone or molar remains, known as "difficult samples", as in the case of victims of the conflict or missing persons. 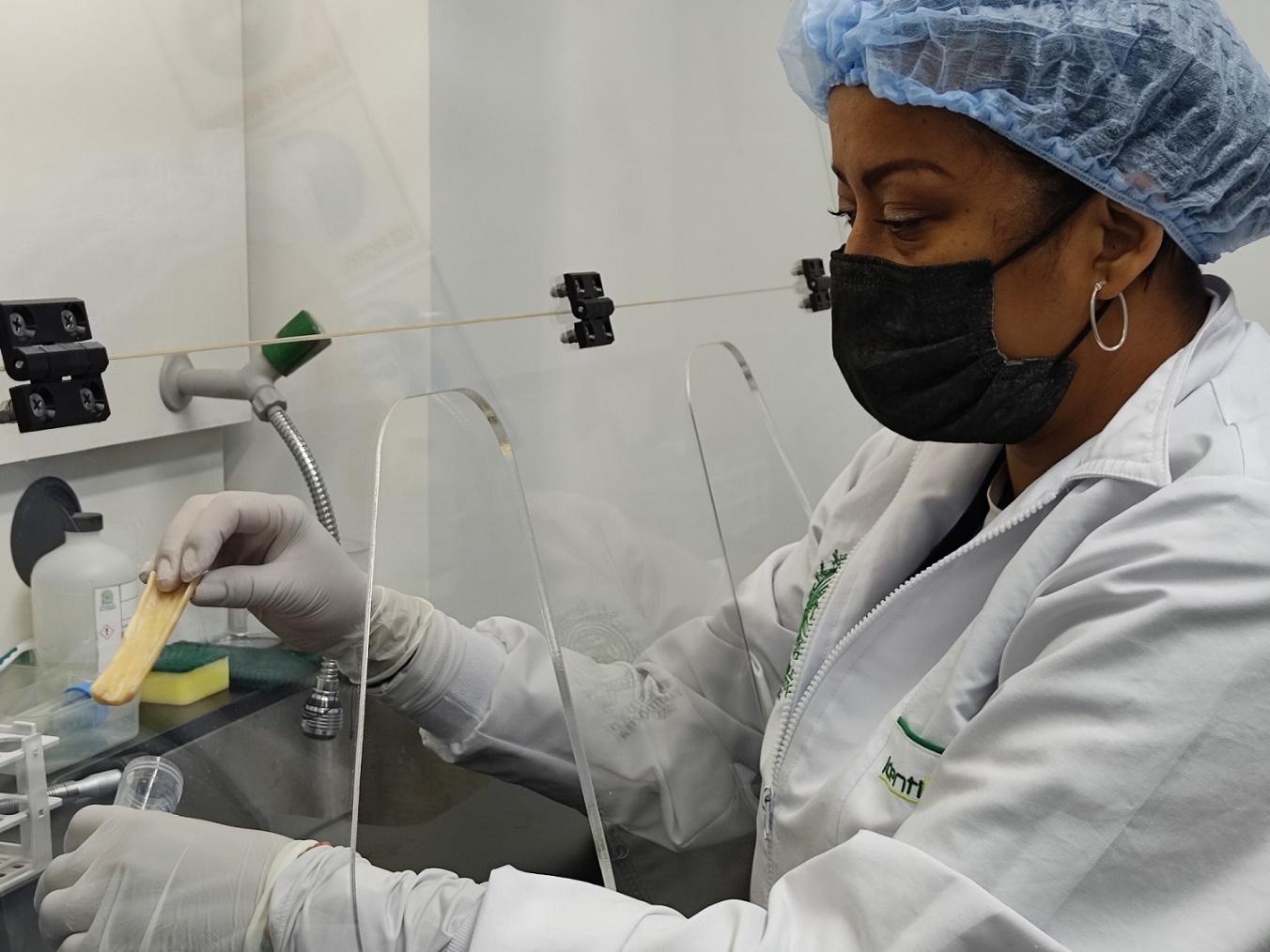 Esteban’s body* was found in the Porce River three days after he disappeared from his home in El Carmen de Viboral, eastern Antioquia. He was in an advanced state of decomposition. The National Institute of Legal Medicine and Forensic Sciences identified him by his dental chart. His mother saw him but did not recognize him. "That is not my son. I asked for the DNA test. If they don't do it, I won't accept this identification", said Gloria*, unhappy with the identification of the Prosecutor's Office, which did not agree to her request, "We are sorry, we already identified him". Therefore, she looked for IdentiGEN on her own.

This laboratory, located on Universidad de Antioquia’s campus, has been working in the field of human genetics for more than 40 years. It has focused on the resolution of kinship cases based on maternity and paternity tests. During that time, it has solved about 19,000 cases.

They also perform analyses to confirm identity using skeletal remains (see box). These are also known as "difficult samples" due to their complexity. About 100 tests, preserved since 2003 at -20 degrees Celsius, have been performed in this field.

"In Colombia, there are very few laboratories that perform these tests because the investment is very significant, not only in the equipment but in the expertise. Besides, it requires infrastructure with environmental conditions different from those of other samples", explained Adriana Ibarra Rodriguez, PhD in Biology and coordinator of IdentiGEN.

Through the scientific work of this laboratory, not only can a surname be confirmed, but also a period of uncertainty, as in the case of doña Gloria, can have closure. People know whether they are mourning the remains of a child.

To take the bone samples from Esteban's body, the analyst and bacteriologist Yeny Cecilia Posada Posada went to the cemetery of El Carmen de Viboral. There, she took samples of the right and left femurs —she always takes a counter-sample because all negative results are confirmed— for quality control purposes. She compared the bone samples with a blood stain from doña Gloria and, indeed, they were mother and son. "Is it really my son? "Yes, ma'am", Yeny told her personally.

Yeny Cecilia's days are spent not only in the extraction booth, where she cleans and cuts the bone fragments, centrifuge and DNA amplifier. They are also spent on roads and in cemeteries. She has no idea how many she has visited. From experience, and from what she learned from her profession, she knows that the presence of a judge is required to perform a procedure. A judge authorizes each cubic meter to be moved. As the procedure is done in the presence of family members or interested parties, tense situations can arise, so police are sometimes required.

During exhumations, she puts on her protective suit, cuts the fragments she needs for testing and takes photographs. She then returns with the samples in custody to the laboratory in Medellín. The responsibility of taking them with her weighs heavily because she must answer for anything that happens to them.

She studied criminal investigation at the Criminal Investigation School of the National Police and has been working as a forensic analyst for IdentiGEN for 19 years. That is why she perfectly knows the material that contains the hereditary information of humans —DNA— and how it breaks down or degrades.

The degradation or preservation of a body also depends on environmental conditions. "The decomposition of plant compounds generates acids that can penetrate the bone structure and create a "barrier" that prevents us from accessing the DNA because it adheres to molecules. We cannot penetrate it with our current methods", she explained.

In fact, she has come across cases where it is not possible to obtain a genetic profile because the body received a large amount of formaldehyde during the funeral arrangements, and it degraded the DNA. "It has happened with soldiers and policemen who died very far from the place of origin of their families. Between 8 and 15 days can pass while they are carrying the bodies and their loved ones arrive. We have had cases of bones that had been buried one or two years, and we definitely did not obtain results", said Posada Posada.

However, these cases represent a minimal percentage. The technology to access DNA, amplify it and obtain a genetic profile has come a long way in recent years. More than 95% of the samples are processed without major difficulty.

The analysis used by Yeny Cecilia and other researchers with access to this area of the laboratory is used within the framework of civil justice to claim an inheritance, a pension or a subsidy. It also provides peace of mind to families that need to confirm the identity of a loved one and access the more complex level of "reliable identifications".

In Colombia, the Code of Criminal Procedure establishes three types of reliable identification, that is, identification beyond any doubt. These range from the simplest to the most complex and from the most inexpensive to the most expensive. Fingerprints are the first method, although if there is no body to match them, or it is in an advanced state of decomposition, this identification procedure is impossible to perform.

The second is the dental chart, that is, the individual's dental history. However, if an individual never visited a dentist in their life, or the dentist did not upload the history to the information systems, the person cannot be identified through this method either.

The third is DNA, and it is the most expensive procedure. The whole scientific and legal process can cost about five million pesos. It can be done directly through an already existing genetic profile or an object such as a toothbrush, a comb or a tooth. It can also be performed indirectly through relatives of a deceased or missing person. This is the most common method.

"Although all three are equally valid in the justice system, we have had cases such as doña Gloria's, where people are unhappy with the results delivered by Medicina Legal because they keep a small hope that their relatives may be alive, or they doubt the process of delivery of the body. Then, they look for us", concluded analyst Posada Posada.

The laboratory was accredited between 2006 and 2016 to test bone remains. Between 2017 and 2019, it was remodeled to offer the service again and extend it to DNA analysis in dental pulp through molars. For now, they are waiting for the certificate from the National Accreditation Body of Colombia (ONAC). With it, they could openly offer these services from the first quarter of 2022. It would be the only laboratory in western Colombia, between Nariño and Córdoba, to have this accreditation.