The Bioprocesses Group of the Faculty of Engineering is developing a cleaner from the waste of this fruit. The project is in its final stage, and the alliance between the university and a private microenterprise, plus state financing were fundamental. 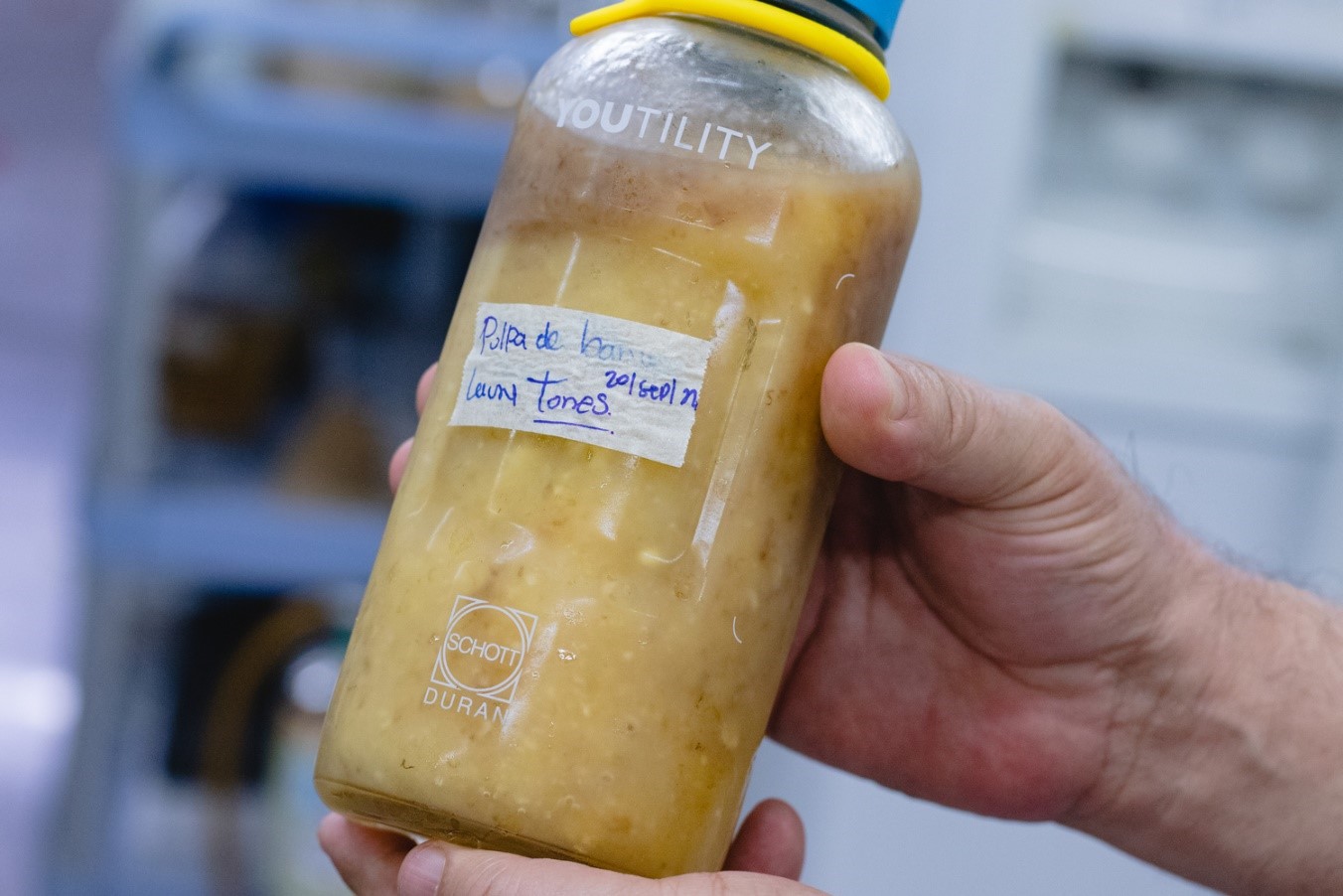 The study carried out in the Bioprocesses laboratory is working with a part of the banana pulp that is discarded for food production but can be a raw material for a cleaner and disinfectant. Photo: UdeA Communications Office / Alejandra Uribe F.

One day in mid-2019, the date is unclear, someone left an unproperly tied plastic bag with banana pulp waste in a waste disposal area at a food processing plant in Apartadó. Upon returning to work after a few days off, employees found a white stain and traces of corrosion on the floor where the contents were spilled.

This accident aroused the curiosity of one of Universidad de Antioquia’s interns working at Las Mazamorras. She pointed it out to Ángela Montoya, manager of this small company located in Urabá, Antioquia. Ángela, in turn, asked Natalia Andrea Gómez Vanegas, professor of UdeA’s Department of Chemical Engineering, to analyze what happened.

"Approximately 40% of the banana is peel, and 60% is pulp. When we eat it, we ingest it all, but when we process the fruit for other products, 16% of the pulp is discarded. It is a semi-liquid, pasty residue that is difficult to collect, and it causes blockages in pipes, among other damages", explained Ángela Montoya.

The businesswoman added that this is a problem because of the banana’s collection and final disposal, and it can also generate environmental impacts since no adequate way had been found to treat or use it.

"As we are dedicated to food production, we needed an operator to help us develop this circular economy project; a cleaner, which was the potential we saw in this waste, so we looked for Universidad de Antioquia because it has the technical expertise to do so", Montoya noted.

Professor Natalia Gómez is a member of UdeA’s Bioprocesses Group, attached to the Faculty of Engineering. It has been working for several years on ethanolic fermentations, and therefore, accepted the challenge of researching the potential of the substance as a cleaner and disinfectant.

This researcher sensed the potential of this compound. She began to research the behavior of banana pulp residues, which were the cause of the event, with a student from Urabá who was looking for an internship and three professors from the Faculty of Engineering. The project was financed with resources from the Sistema General de Regalías and had the Ministry of Science as an ally. The executor was the Governor’s Office of Antioquia, which selected ACOPI as the operator.

"We needed someone to carry out the project, which was executed by the Faculty of Engineering’s Academic Extension Center (CESET), so we included a biochemical engineering student from Urabá. She agreed to come to Medellín because there is no infrastructure there. During her internship in this laboratory, she produced the alcoholic and acetic bases for the disinfectant", explained the professor, who was the coordinator of internships in Urabá at the time.

Laura Camila Torres Berrío, the intern, said, "these fermentations allowed us to obtain a compound that we were able to use to evaluate its potential as a disinfectant after adapting, filtering, cleaning and concentrating it. This was necessary before going on to formulate a product of this nature".

The professor pointed out that one of the most important aspects of the research was the fermentation with mother strains using the traditional vinegar method. That is, they put scraped banana residue in flasks to produce acetic acid. The banana residue replaced panela, which had been used for years. Acetic acid and ethanol are essential substances in commercial cleaners.

In addition, further developments were introduced in both alcoholic and acetic fermentations until low sugar concentrations were reached. The purpose was to reduce sticky and attractive effects for insects, which is necessary in the market if a competitive product is sought.

"We then evaluated the disinfectant capacity. For this we hired the external laboratory Tecnimicro, which analyzes the effect of both extracts on specific microbial species used for this type of test: Fusarium fungi, bacteria such as E. coli and Bacillus subtilis and others established by technical standards", said Professor Natalia Gómez.

Tests continue and, so far, a disinfectant action on some of these microorganisms has been proved. What they are working on now is the optimum concentration of these derivatives to incorporate in a commercial product designed for surfaces such as steel, plastic, earthenware and epoxy resin.

For the near future, this executive and the Bioprocesses Group plan to address the potential of banana peel to find a flour for animal nutrition and thus improve the disposal of this waste, as seems to have been achieved with the pulp. 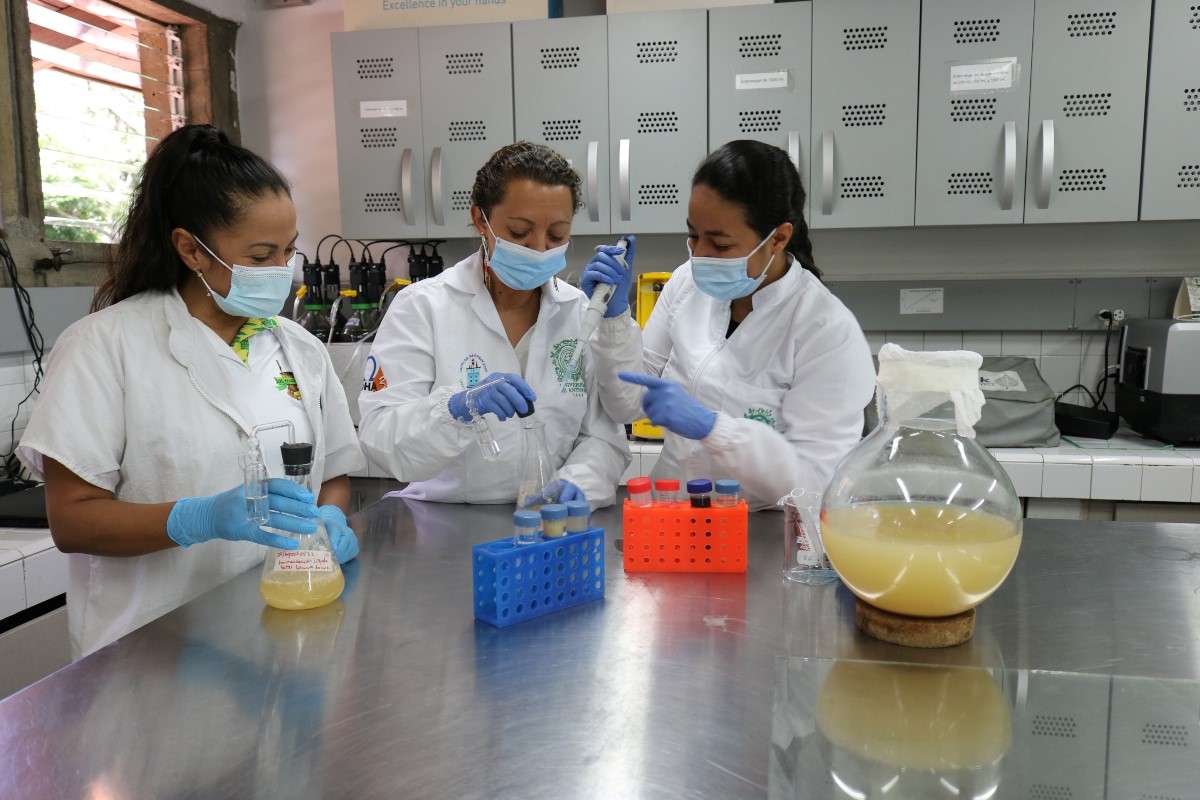 A Plant with Great Potential

Bananas and plantain are plants of the same family. They are grown in all regions of Colombia. Between them, they make up more than 550,000 hectares planted. They are part of the basic food basket established by DANE and are a very important part of the national economy. For this reason, different research centers are working on projects to expand their use.

In the book Investigación e innovación en ciencias farmacéuticas y alimentarias (Research and Innovation in Pharmaceutical and Food Sciences), published in March 2022 by UdeA’s Faculty of Pharmaceutical and Food Sciences, two advanced projects are highlighted. Apart from using different parts of the banana plant, they are environmentally friendly.

One seeks to obtain plastics made from biodegradable polymers derived from organic waste or residue —pulp and pseudostems— of the FHIA 21 banana variety. According to the text, these are suitable for designing and manufacturing biodegradable packaging and replacing highly-polluting synthetic containers made from fossil raw materials.

The other research, also with the FHIA 21 variety, has to do with the manufacturing of starch films with the addition of different amounts of banana peel nanocellulose and orange essential oil nanoemulsions. They have the potential to be the wrapping of some foods, safe for human consumption and easy biodegradation.

UdeA is also participating in a research project with Universidad Pontificia Bolivariana and Institución Universitaria ITM on the use of the banana and banana bunch stem nanocellulose in the food industry. This raw material has the potential for absorbing fats and sugars and encapsulating flavors and colors of other foods.