Researchers from Universidad de Antioquia and Universidad Pontificia Bolivariana explored the maternal world on social networks. There are support groups in which many mothers feel safe and confident as they seek new ways of being mothers away from criticism. 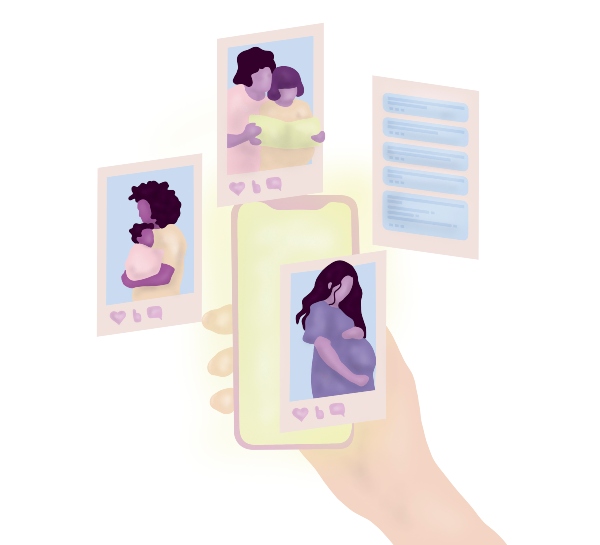 "This is not the way I want to give birth", thought Juliana Vera seven years ago while she was expecting her first child. It was after watching a documentary that showed how obstetric violence (see box) seemed normalized in the medical environment. Like many new mothers, she was confused and sought information to calm her uneasiness.

"I started to investigate what the World Health Organization (WHO) said, whether there were any legal documents in Colombia that; at least; talked about childbirth care and supported humanized childbirth", said Juliana. She refers to a model that prioritizes the wellbeing of mother and child; a birth that is as natural as possible, for which the pregnant woman is informed of each medical procedure, and her wishes are respected.

Juliana led, along with ten other mothers, the creation of a "tribe" called Mamás Tejiendo Camino (Moms Weaving the Way), which was born as a postpartum support group. It quickly addressed motherhood in general with face-to-face meetings to talk about gestation, humanized childbirth, breastfeeding preparation and related topics.

Shortly after, Juliana wanted to take this tribe experience to the virtual world and thus created the Facebook group Parto Humanizado Medellín (Humanized Childbirth Medellín), which today has more than 6,500 members. In this space, mothers ask questions, express their complaints, request information, ask for help for themselves or others, write about their experiences and, ultimately, participate in a wide-ranging conversation about motherhood. In this way, they have access to information that initially seemed scarce and scattered.

The analysis in which these researchers participated was conducted through grounded theory, a focus group and 17 in-depth interviews with health professionals and women members of the Facebook group.

This group was part of a study conducted by researchers and professors from Universidad de Antioquia and Universidad Pontificia Bolivariana. The article Contemporary Maternities: Digital Tribes and Interactions with Health institutions resulted from this study.

The authors not only recognized in this virtual tribe a permanent flow of information but also found "that it generates support groups that transcend virtuality; relationships that make a lot of sense in the daily lives of women", explained Doris Elena Muñoz Zapata, a researcher and professor at Universidad Pontificia Bolivariana.

In addition, they found a common denominator among the mothers. "They are women who are looking for a different type of upbringing, a more respectful one where physical punishment practices are excluded, and different feeding methods, such as longer breastfeeding, are sought", said Muñoz Zapata. She developed her doctoral thesis on this topic during her internship at the Social Response in Health Research Group, which belongs to UdeA’s Faculty of Medicine. The group is led by Gladys Rocío Ariza Sosa, PhD in Public Health.

Among these "new" parenting guidelines are those that promote babywearing, a transport system that ensures constant contact between baby and caregiver; co-sleeping, a practice that encourages parents to sleep with their children in the same bed; breastfeeding extended after the first year; and free movement, respect for developmental rhythms in terms of body management, and experimentation without constraint from their first months of life.

New Forms of "Mothering" and Their Conflicts

Ariza and Muñoz pointed out that, during the research, they found out that mothers were frustrated with health programs and professionals because of their unsatisfactory guidance on the parenting trends mentioned above.

The published article highlights that there is a perception that health professionals are out of date, which leads mothers to "take a defensive and confrontational attitude towards the indications received during medical consultation and growth and development checks".

It has even caused some mothers and their families to drop out of health programs. According to the research, mistrust arises from the lack of updating, and "imposing language that emphasizes their power over the women being treated". Such mistrust makes communication between health professionals and women difficult from the beginning. As a result, women look for alternatives to contrast and even question the information they get to make their own decisions on the matter.

"What they find when they take on these new practices, in general, is questioning, rejection and isolation. These groups then begin to form networks that support women in their daily lives. They back women up and encourage them when they have to make even important decisions such as leaving paid work or re-entering the workforce", said Muñoz Zapata.

According to the study, women consider the puerperium stage (from delivery to 40 days later) and the transition to motherhood as a period without sufficient support from institutions since the existing programs only focus on the care of their babies.

For the researchers, the dynamics of these groups gradually generate transformations that start from the individual sphere and permeate other areas, such as health institutions.

The public health professional and professor Gladys Ariza Sosa indicated that these movements have managed to counteract obstetric violence since it is frequently pointed out and rejected. "There are some very shocking accounts of how the biomedical, patriarchal and androcentric system violates them in many ways, which range from the way vaginal births are managed to the abuse that is committed during cesarean sections, in procedures that are not explained to them or are not consented to".

Finally, Doris Muñoz Zapata commented that it is important for academia to commit to these issues. "On the one hand, there is the pressure that these health professionals handle, but it is important to work on gender, empathy and communication issues during training. In addition, we also reproduce violence through language and the stereotypes of idealized, unrealistic motherhood that we promote in the media. That is why it is necessary to engage many actors, including academia, in a very powerful way".