The Feuds over the Power of Symbols

Since April 28 of this year, when the most recent national mobilization began, monuments of characters related to Colombia's colonial, republican and contemporary history have been torn down in at least five cities: Pasto, Manizales, Neiva, Cali and Barranquilla. At Alma Mater, we take a closer look at what lies behind this dispute for representation. 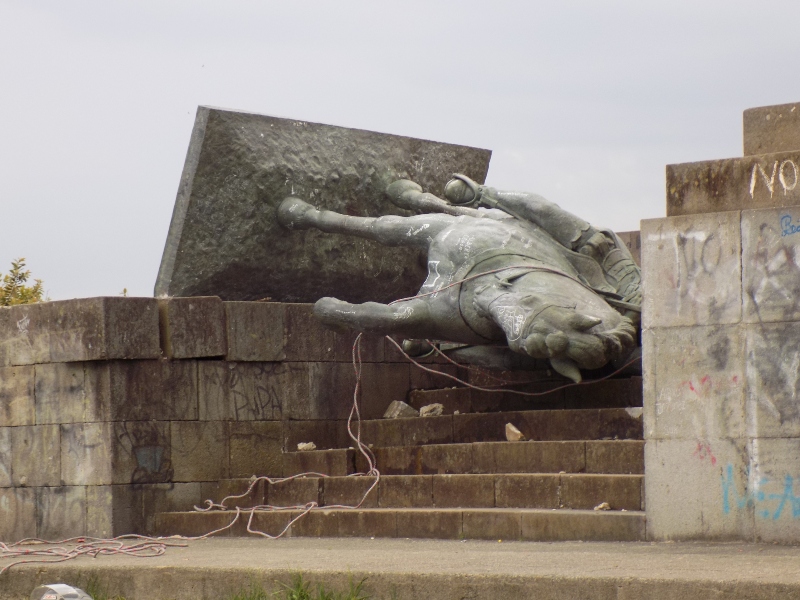 A journalist asked Édgar Alberto Velazco Tumilla, secretary of the AICO (Asociación Indígena del Suroccidente) movement, why the Misak people knocked down the sculpture of the conqueror Sebastián de Belalcázar, in western Cali. He said that, among other historical and circumstantial reasons, they did it to "build a collective power, a popular power."

"We propose new symbols that reconcile us to all political actors and sectors in these public spaces," said the leader hours after the statue was taken down in the presence of thousands of indigenous people from the south of the country. They came to this area in the capital of Valle to congregate. The indigenous people of this movement held a "political trial" against Belalcázar on September 16, 2020, in Popayán. They declared him guilty of crimes such as genocide, rape, dispossession and land grabbing.

However, the underlying discussion behind what has happened over the last few months with the monuments is not about the statues themselves. It is about the historical narratives that represent the memory and power relations that are contested in them.

For José Jairo Montoya, professor at Universidad Nacional and Universidad de Antioquia, with these "mediating bodies" —as he calls the monuments— strategies of power and recognition are at play. They bring out the political dimension and, in their effectiveness or ineffectiveness, as traces of memory in different spaces and times, end up becoming the point of convergence of struggles and disputes over their possession or visibility.

Furthermore, in places where there are monuments, there is a kind of tension that goes against the grain "as if wherever a symbolic ‘artifact’ appeared —whether in bronze, stone or pigments; in letters or music; in dances or rituals— its counterpart also emerged, that is, its disappearance," said Montoya. He emphasized that this "monumentalization" is part of the survival of humanity.

These symbols in open spaces are typical of Modernity and are part of the construction of national states. "We began to see them more often in the 18th century in some European countries, and in America, in the 19th and 20th centuries," explained Tatiana Perez Robles, PhD in History. She is a member of Universidad de Antioquia’s Modern and Contemporary History Research Group, which belongs to the Faculty of Social Sciences.

The professor explained that the public arena is a determining factor in this conversation. A monument "is in a space that is supposed to belong to everyone. Since it is there, anyone has the right to intervene, even the environment itself intervenes." In the national debate that the interventions and knocking down of these statues have raised, the dichotomy is when it can be considered vandalism and when iconoclasm: the rejection of the cult of an image considered ‘sacred’."

"It is iconoclasm when there is an organization of communities, as in the case of Belalcázar, where a population meets and makes a judgment on a statue that represents all the oppression, genocide and extermination of a population. Since the statue was in a public space that, historically, has meant a lot to the Misak people, the decision was to knock it down," explained Pérez Robles.

However, the Academia Antioqueña de Historia (Antioquia Academy of History) pointed out that these acts against monuments are vandalism. According to this entity, the acts have led to the destruction of material heritage of cities. "No argument for reasons of religion, political ideology, philosophy or any other is valid to tear down or destroy what is most ancient and dearest to the interests and idiosyncrasy of a people."

Pérez Robles said that, beyond looking for a definition or considering these acts as something good or bad, it is important to understand why they happen. He said that even the alteration of monuments that lacks the organization typical of the Misak and that seems to be the result of the "heat of the moment" also expresses a questioning. "Behind these acts, there is a claim of some populations that perhaps are not so organized, but they do respond to some requests they make."

In 2017, the congress approved Act 1874 to bring back history to schools after it left the curriculum in 1984 and became part of social sciences. For the Academia Antioqueña, this way of teaching history in the last 35 years would have been insufficient to acquire universal knowledge and information about the homeland. Both Pérez Robles and the Academy consider that, since processes are not known, the alterations made to the characters celebrated in the monuments result in a low appraisal of them.

Just as these symbols are altered, removed, questioned and judged, the need to represent ourselves remains, and this representation is influenced by the exercise of power. "It is normal that this is happening. Now, it is very visible because it is happening within a situation that is loaded with symbolic and physical violence, but this is a change within representations. The side that governs decides," concluded historian Tatiana Pérez Robles. 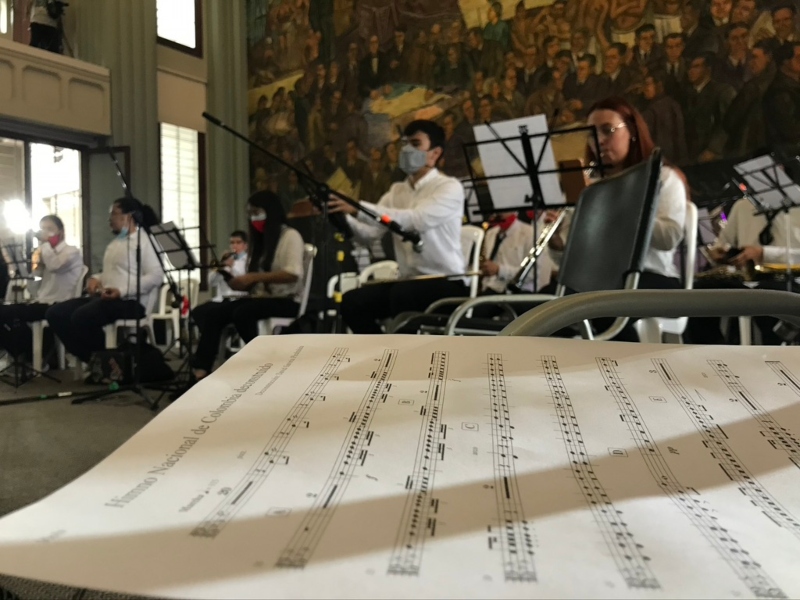 The "Anthem Deconstructed" was performed at the Museo de Antioquia by the Revolucionaria Orquesta Simbólica. It was directed by Susana Gómez Castaño. Its composer is David Gaviria Piedrahita. Photo Sergio Rodríguez.

On May 14, a version of the Colombian anthem was broadcast on social networks. The arrangements were made by David Gaviria Piedrahíta, a graduate in composition from the Faculty of Arts of Universidad de Antioquia. In this version, parts from John Williams’ Star Wars series soundtrack, specifically from the "Imperial March", are used. The musical piece was performed by the Revolucionaria Orquesta Simbólica, a group of young people who performed as volunteers and were directed by Susana Gómez, also a graduate of UdeA.

With the "Imperial March", Gaviria Piedrahíta used a popular culture reference that was easily identified. Moreover, he links it to terror and the apparent impossibility of movement that he wanted to express. "There is a moment in the anthem when that march starts to attack, and the anthem tries to be bigger again, to sound the way it has to sound, but the march confronts it again and makes it small again, and that to me symbolizes the fear that puts us in this ordeal," he said.

The composer does not intend this to be a definitive work. He does not want to transform the anthem forever or destroy its historical version. "I am simply dealing with this through a deconstruction, a catharsis, a mourning of what is happening. It is not a desire to say let's destroy this just because," he explained.