Stronger and More Frequent Hurricanes, Another Threat to Mangroves

In San Andres and Providencia, the effects of hurricane Iota on their ecosystems are being studied. Satellite tools were used for the mangrove forest. They are beginning to give researchers an idea of the partial loss of this habitat for many species of flora and fauna. 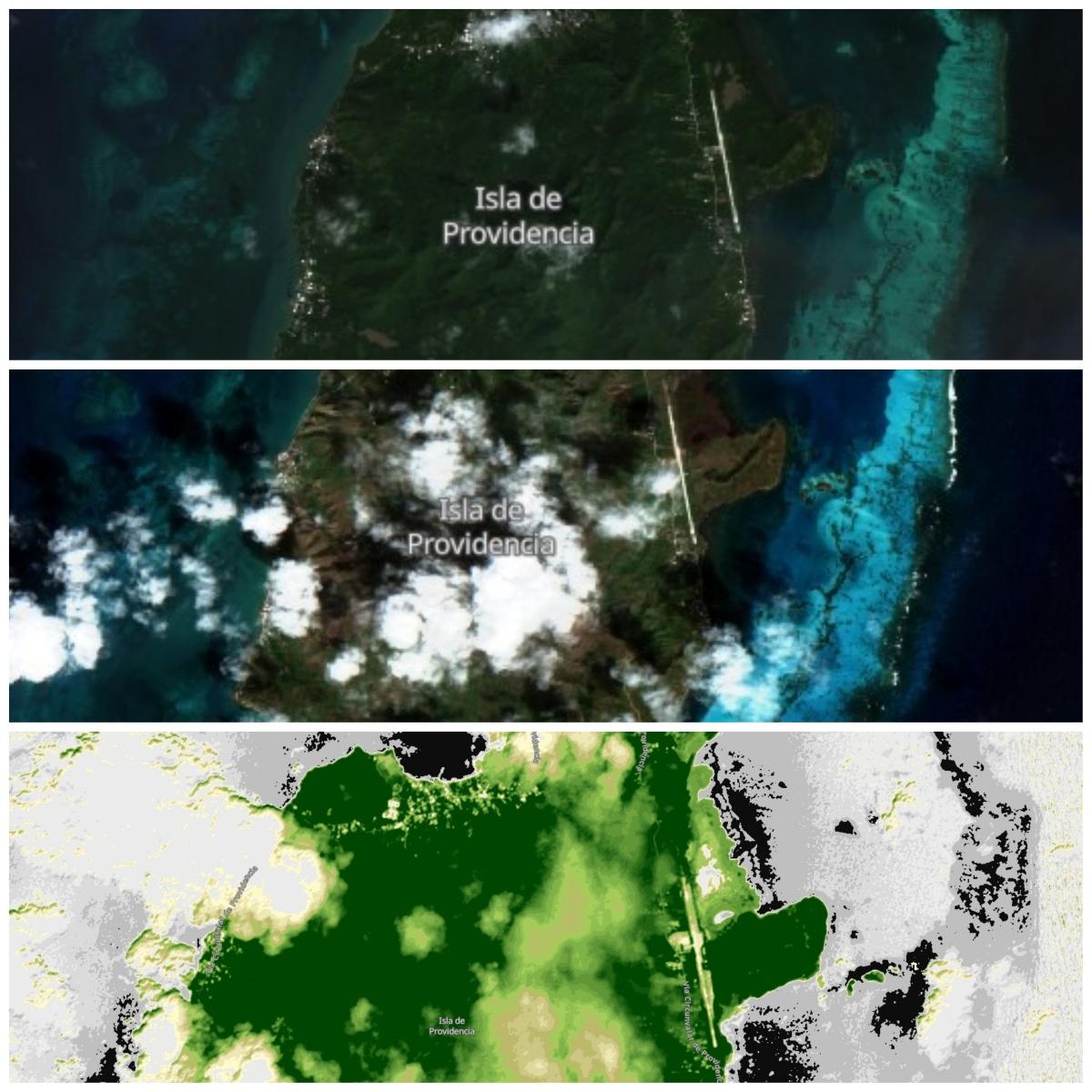 Providencia Island as seen from the European Union's Sentinel 2 satellite. The top and middle images are within the visible light spectrum, that is, they are visible to the human eye. The bottom one belongs to the Normalized Vegetation Index, which displays only the greenness of the vegetation. It shows damage to the mangrove swamp near the airport. Photo: Courtesy

Between November 15 and 16, 2020, hurricane Iota, a category 4 hurricane on the Saffir Simpson scale, with winds between 210 and 250 kilometers per hour, passed over the Colombian archipelago of San Andres, located in the western Caribbean Sea. The eye of the meteorological phenomenon moved 18 kilometers away from Providencia and destroyed more than 90% of the houses and other infrastructure of this island.

Today, one year later, Colombian scientists from the Center of Excellence in Marine Sciences Corporation —which Universidad de Antioquia is a member of — analyze the impact of the cyclone on the island ecosystems and show the mangrove swamp as one of the most affected. Meanwhile, the reconstruction process is moving slowly.

Juan Felipe Blanco Libreros, professor of biology at UdeA, is a member of this academic group and has dedicated almost his entire professional life, since the mid-1990s, to the study of mangroves.

"In this think tank, we have been analyzing what to do in the recovery process of San Andres and Providencia beyond assistance from the government, reconstruction or immediate measurement of the effects of the cyclone. With the patience of academia, we began to reflect in those first months on the history and characteristics of the ecosystems, particularly mangroves, what were or could be the effects, and what the ecosystems would go through after the passage of Iota", commented Blanco Libreros, an authority on this ecosystem.

Blanco evaluates the effects of the hurricane on the mangroves with satellite tools basically because it is still not possible to enter the Providencia area.

We could establish that, in some areas, there was an important loss of "greenness" of the mangrove because of the damage of trees and their canopy. This is a sample of the vulnerability of the archipelago as a result of the increase in the quantity and intensity of cyclones that pass through this zone of the Caribbean every year.

The most recent report of the Intergovernmental Panel on Climate Change (IPCC), presented last August, warned about the intensification of the hydrological cycle, which occurs both in wet and dry extremes more clearly.

Paola Andrea Arias, professor at the Environmental School of the Faculty of Engineering and member of the IPCC, a UN organization created to evaluate climate change issues, explained that a greater number of category 3 to 5 tropical cyclones are taking place. "Part of what is happening with the hydrological cycle —cyclones are extreme events associated with the hydrological cycle— is because the planet is warming. As a result, the same thing is happening on the continental and oceanic surfaces and the atmosphere. That causes more evaporation, the tropical atmosphere becomes more humid, and that is why we have extreme precipitation events with greater frequency and intensity".

This phenomenon affects some mangrove areas, said Blanco Libreros. "It is already known that hurricanes are experiencing an increase in intensity and number in the western and southern Caribbean, where they were not so frequent. This means that the mangroves of the archipelago of San Andres and Providencia, and other Caribbean regions, will be under greater threat in the coming years".

In the northern areas of the Caribbean (Mexico and the United States), mangroves have gained space, grown and strengthened in the last four decades. They are located in the historical path of cyclones, and this makes them more resistant to the powerful winds and waves that occur during the annual season, which runs from June to November. Something similar happens in Australia.

“Although everything depends on the scale of the meteorological events that are registered, mangroves are generally capable of resisting a certain level of wind and waves... The height and power of the waves diminish as they cross the mangrove fringe. This protects the coasts from erosion", explained the researcher Blanco Libreros.

However, in coastal areas, where the historical passage of cyclones is less frequent than in the northern Caribbean, mangroves are less resistant to strong winds and waves, which are the most common in our country. Today, these ecosystems face the annual passage of two or three hurricanes that are category 3 or higher. The average used to be one of these meteorological phenomena every four years. This contributes to the reduction of mangrove ecosystems in the Colombian Caribbean coasts.

If we add to this the continuous logging for the development of agro-industrial projects and crops, the future of mangroves in the Colombian Caribbean does not look good. For this reason, Professor Blanco also analyzes some alternatives for the recovery of these coastal habitats.

"Thanks to restoration efforts in other parts of the world, we know that a mangrove can reach conditions more or less similar to the previous ones or to reference levels 10 or 15 years after they are planted", said the researcher from Universidad de Antioquia. This means that, with strong hurricanes every year, the recovery of the ecosystem can be much more difficult.

For this reason, one of the aspects that Professor Blanco always emphasizes is education. "In San Andrés, we are working on bringing to schools the knowledge we have about mangroves in particular and the biogeography of the island in general. This is a process of scientific appropriation of the knowledge about coastal ecology and the mangroves of the island by the school, so that, from there on, they begin to formulate ideas of where we want to go", explained the teacher.

He added, "We are working with the teacher Jairo Lasso Zapata, from the Antonia Santos educational institution, Phillip Beekman Livingstone branch, in San Andrés. We began to bring geographic tools for teaching and exploration into the classrooms there. This was because of the motivation generated by the environmental and social problems of the island in students and teachers from other areas.

Perhaps alternatives will begin to emerge from these classrooms to help the mangroves and the island society to resist and resurface from the new reality that the climate crisis is leading us to.

The Peculiarity of the Ecosystem

Mangroves are coastal strips that can extend for hundreds of kilometers. Their width ranges from 400 to 1,000 meters, as in the Urabá region, or a few tens of meters, as in the archipelago of San Andrés and Providencia. They require brackish environments between the salty waters of the sea and the fresh waters of rivers, and they settle on muddy soils.

They are spawning and breeding grounds for many aquatic species, as well as birds, and their characteristic plants capture large amounts of CO2, which makes them an extremely important habitat for facing global warming.

Human intervention, such as logging and the building of infrastructure, are the main threats to this ecosystem.