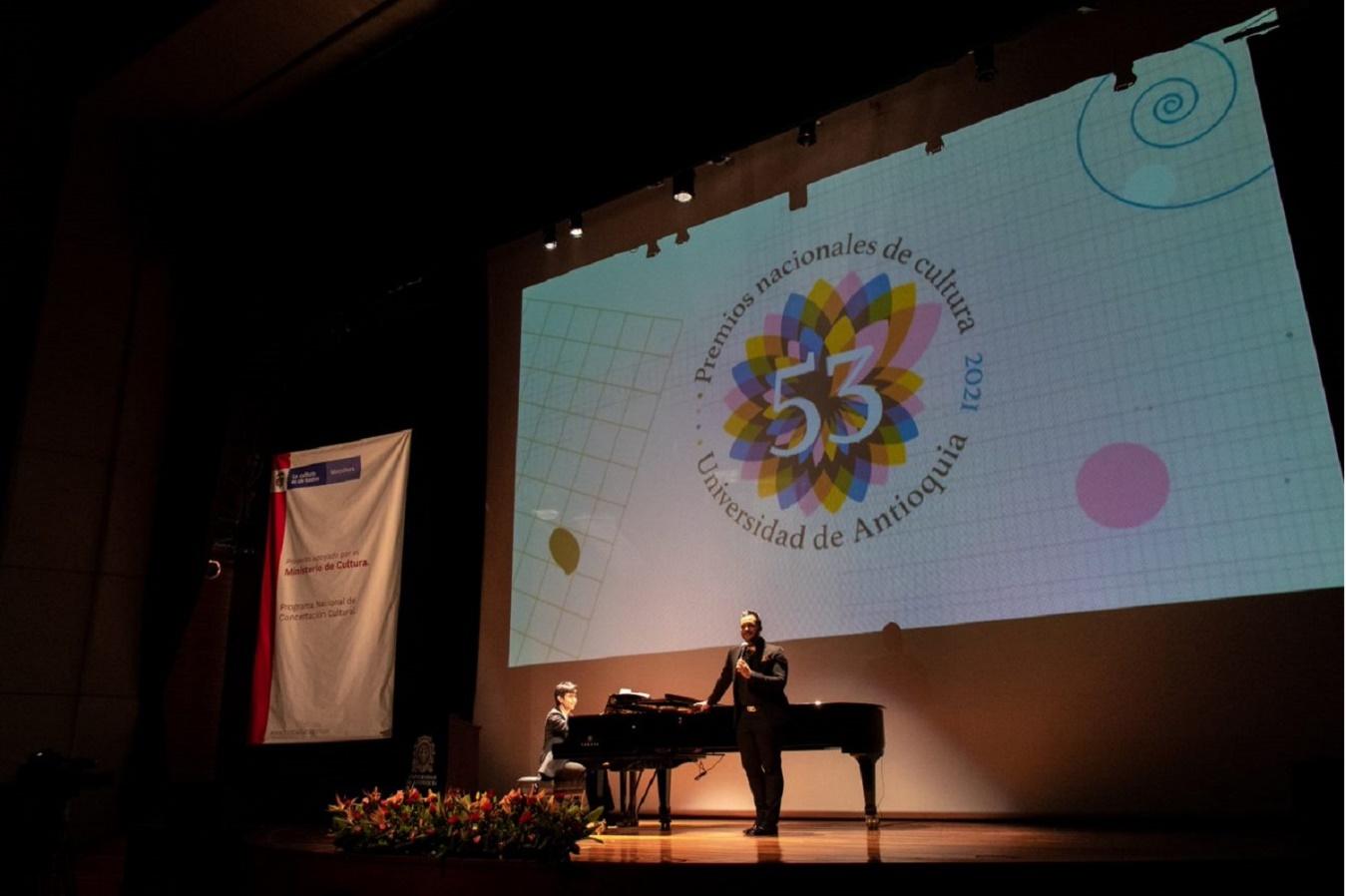 Pianist Andrés Santander Ospina, winner of the 8th National Music Prize, participated in the 2021 awards gala. These awards were born in 1968 with the call for the first National Hall of Young Artists and, since then, they have been held every year without interruption. Photo: Communications Office / Alejandra Uribe

UdeA opened the call for the 54th edition of the National Culture Awards Universidad de Antioquia, for which proposals will be received until July 25, 2022, as established by the President’s Resolution 48918 of May 11 of this year.

On this occasion, the awards will be given in four modalities, each with a different category. Among them, there are two with an emphasis on decoloniality "which focus on the breaking of paradigms, of the very Eurocentric order of knowledge to try to make room for other forms, other dialogues of knowledge", explained Oscar Roldán-Alzate, head of the Division of Culture and Heritage of UdeA.

The director pointed out that, for this occasion, "this cultural policy’s programmatic bases, unparalleled in Colombia's public universities, have been reviewed. This review, which is constant, tries to warn of the changes that are taking place in the cultural world and academic discussions".

Among the 2022 awards, the 9th Music Award, chamber music modality, was announced. This modality is new and was created against the backdrop of UdeA’s space for this format: the Teresita Gómez Performing Arts Hall. It is in block 17 of the university campus, and it will hold a national chamber music convention in October. In this category, the academic, traditional Colombian and contemporary genres are included.

You may be interested in: A new space for culture: Teresita Gómez Performing Arts Hall

Another novelty is the 39th National Literature Award, testimony modality, which, on this occasion, will receive applications with the theme Memories of War, which is a response to the transformations of Colombian society in the last decade. A literary narrative that documents verifiable events and facts is required.

The call for the 46th National Hall of Arts, decolonialities, will receive applications with this theme as a result of academic, political and social responses to the processes of colonization, colonialism and coloniality anchored in time and global geopolitical configurations.

In the same vein, a call is made for the 8th Memory Award, decolonizing the archive, collective self-recognition, focused on archival research processes that question hegemonic narratives and the ways of constructing history based on documents of various kinds.

Proposals and applications for the 54th National Culture Awards Universidad de Antioquia will be received until July 25, 2022, at 11:59:59 p. m. The results of the accepted works will be published on August 2 after verification of the requirements. The judges have between one and two months to evaluate the works depending on the categories, and on Thursday, October 27, the winners will be announced at the Teatro Universitario Camilo Torres Restrepo.

The call is open to Colombian residents and foreigners who can prove two or more years of legal residence in the country, in addition to the other general and specific participation requirements described in the rules.

For further details on the National Culture Awards Universidad de Antioquia, please visit the President's Resolution 48918 and the website of these awards.